Yes, yes…we all know security is a major concern surrounding the Internet of Things.  Unfortunately, we’ll be hearing about IoT security for quite some time as organizations continue to struggle with how to secure it. A recent study by 451 Research of more than 600 IT decision-makers worldwide found “55.1% rated IoT security as their top priority when asked to rank which technologies or processes their organizations considered for existing or planned IoT initiatives.” The second most ranked priority was a tie between IoT infrastructure equipment and IoT applications at 39.9%.

According to 451 Research, some business leaders are slow adopting the Internet of Things regardless of the upside benefits because they believe the risks are still too high.

This has created an opportunity though for vendors.  Enterprises value security capabilities as the top reason for choosing a commercial IoT platform, with 58% of survey respondents ranking it as the top attribute in choosing a vendor partner. 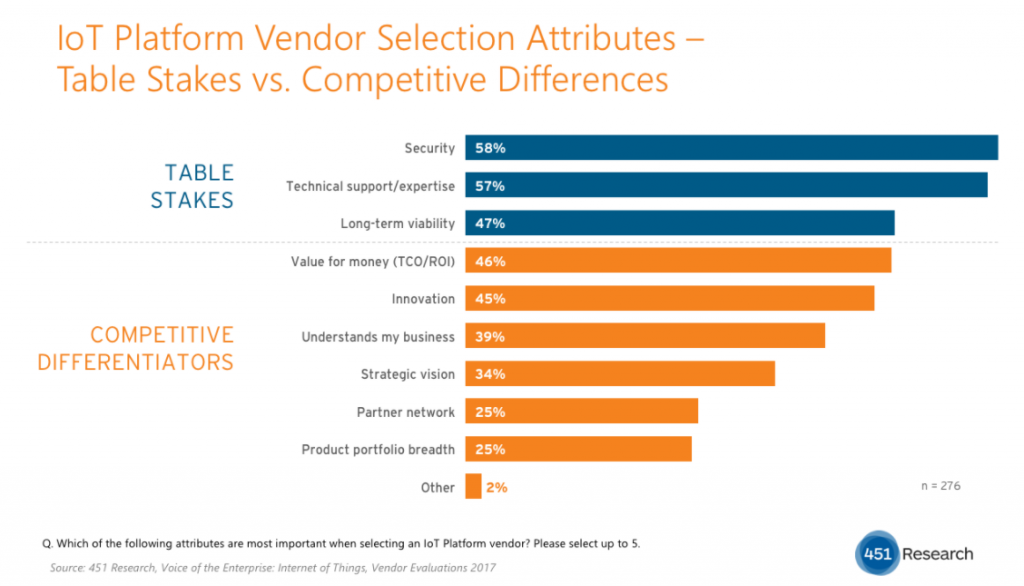 At least according to Brian Partridge,  Research Vice President for Internet of Things at 451 Research,

“The silver lining in all of this is that IoT security breaches have raised overall awareness of the issues and consequences when nothing goes wrong.  It also raised the bar for suppliers who are increasingly fighting for deals based on their security cred. There is still a need for trusted actors that can bring IoT security together holistically for customers.”

For enterprises, an IoT security article from www.networkworld.com provided two important security processes that all enterprises should perform. But also spotlights areas where vendors can help enterprises stay secure.

IoT security will remain a hot topic of discussion for quite some time as firms figure out the best and most economical (cost-benefit) approaches. In the meantime, vendors have an opportunity to stake a position as a solver of this top IT priority.

Kevin Gold is a B2B media veteran with more than 10 years of experience in the data center, hosting and internet infrastructure markets, primarily in executive marketing and communications roles. He researches, writes about and provides strategic guidance to B2B companies on trends in IoT security, endpoints and applications that drive business growth.

Drones Disguised as Pigeons in China

China launches a drone disguised as a pigeon.

IoT Use Case for Car Dealerships

Car dealerships are ripe for disruption by the IoT.